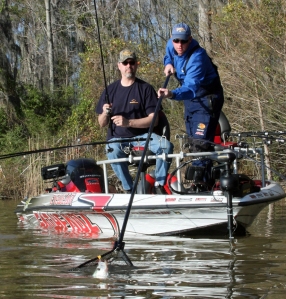 Ed Moes and I finally met this last week. It was good to put a face to his name after years of friendship. You may know him by his famous forum, Crappie.com. Thousands of people recognize him as “Slab” on his site.

Crappiemasters president, Paul Alpers joined us for lunch at Jim ‘n Nicks BBQ. We quickly learned that Moes was not the typical “computer geek” he readily proclaims. Moes loves crappie fishing and the people that share the sport.

Moes had the foresight to start Crappie.com when the average dial-up connection speed was well, awful. For Moes, his vision was to create a community of the world’s friendliest anglers. He knew that they wanted to share information, learn from others, and maybe brag a little. While sitting with Alpers and Moes I realized I was sitting with two giants in the industry. Pretty cool. We enjoyed a great lunch, fellowship and shared some ideas.

It seemed fitting that these anglers should fish together. One is blazing a trail on the tournament circuit. The other, has created America’s crappie community.

Congratulations to B’nM Poles team, Whitey Outlaw and Mike Parrott on their Crappiemasters AL championship win. It was tough fishing this year with a major moon, high pressure, and river flooding. Crappiemasters and the City of Millbrook put on the best events on the trail. Anglers love to come to this area and we thank them for a job well done.

45-year tackle industry veteran Marketing and Crazy Ideas at TTI-Blakemore Fishing Group (Home of Road Runner Lures and six hook brands including Tru-Turn, Daiichi, XPoint, Team Catfish, Mr. Crappie and StandOUT Hooks.) Home of Gun Protect. The opinions expressed in this blog are those of TJ Stallings and not necessarily those of TTI-Blakemore.
View all posts by TJ Stallings →
This entry was posted in Fishing and tagged Crappie, Crappie.com, Crappiemasters, Jim N' Nick's BBQ. Bookmark the permalink.

Texas Pistol In The Kitchen

Food adventures of a Texas Pistol

THE BEST OF POETRY

Confessions of a fisherman, hunter and tinkerer

Fishing, Hunting and Do It Yourself stuff

An Originalists view of The World We Live In Today

Gear to Survive the Zombie Apocalypse

because anything is possible with Charisma

Hobbies, How To, and Humor

God, Hunting, Family, Politics, Fitness, and the Love of our Country.

Observations of a Land-owning Hunter